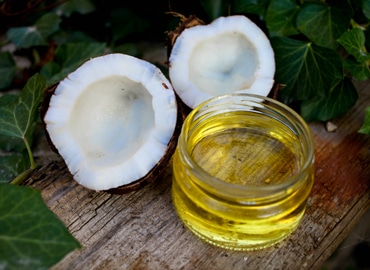 Blame it on Gwyneth Paltrow.

The newly single actress has been credited by celebrity magazines with popularizing “oil pulling” among her fans. This latest beauty regimen is an ancient Ayurvedic practice of swishing virgin coconut oil around the mouth for up to 20 minutes.

Paltrow claims oil pulling adds a shine to her teeth and gives her an Oscar-winning smile.

Dr. Leslie Laing is a professor with the University of Toronto’s Faculty of Dentistry who’s scientifically studying the practice. Writer Dominic Ali caught up with her to learn the ins-and-outs of oil pulling.

If oil pulling has been around for such a long time, why hasn’t it been subject to more scientific study?
Various researchers have been looking into the components of virgin coconut oil (VCO) such as capric acid and laurel acid, but not in a clinical scenario. The concept of “oil-pulling” may be considered too much along the lines of “snake oil” use. However, the technique has been used in Indian culture for 3000-5000 years with enough benefits that make one think that there must be some validity to it. Perhaps it is time that some of the ancient techniques and products be tested in a rigorous scientific setting.

What inspired you to study oil pulling?
Since my primary research is with the autoimmune disorder of Sjögren’s Syndrome (SS), I’m on the lookout for methods to increase either salivary flow or to moisturize the mouth of those afflicted with SS, which affects up to 430,000 post-menopausal Canadian women. I thought oil pulling might at least provide lubrication for their mouths. The emerging evidence in the literature that such a safe product might also inhibit bacteria associated with cavities, gave me the idea that this might be worth investigating.

What have you learned so far?
I routinely test the saliva or plaque of patients who may be at high risk of having caries (cavities) for whatever reason: diet, habits, dry mouth, etc. After having tested the VCO and the oil-pulling technique on myself for a number of weeks, I found that the oil had not only a pleasant taste, but also lubricated the mouth.

I have tested oil-pulling technique with virgin coconut oil (VCO) over a 3-week period in a dozen of my SS patients in addition to others who have xerostomia (dry mouth) from other causes, such as medication use. Only one person did not like the texture and flavour of the VCO and consequently discontinued its usage. The others were very pleased with the effect stating that their mouths felt more comfortable after the VCO oil pulling, that their teeth seemed “brighter”, and that they didn’t have to interrupt their sleep at night to have a drink of water. In addition, the microbial counts either remained the same after the treatment in a few patients or decreased tenfold. These were very encouraging results although the number of patients involved is very small.

Why does oil pulling seem to work?
There is a possibility that the components of the VCO, such as capric acid and/or lauric acid, may interfere with the binding of the caries-associated bacteria to the teeth. As a result, the numbers of bacteria decrease and the caries risk is reduced. As far as moisturizing the mouth, it makes sense that oil would linger in the mouth, particularly in a dry mouth. Furthermore, since the teeth of a person with a dry mouth tend to have more of a matte finish than a glossy finish as seen in someone with a normal amount of saliva, that the moisturizing barrier or coating left in the mouth after oil pulling would give a shinier appearance to the teeth. These findings were reflected in the questionnaires regarding quality of life, which seemed to improve after the technique and seemed to boost their self-esteem.

Do you have any advice for novice oil pullers?
Try the technique only for a few minutes at first. The texture of the VCO in solid form may be unpleasant at first but once it melts it will be more comfortable.

Be sure not to swallow the oil used in the oil pulling technique but spit it out after use, either into a cup or garbage pail instead of the sink since the oil could clog a drain if it solidifies.

According to the literature, there may be a negative effect at first, in which case it may seem that the oral symptoms are worsening, but this should subside within a day or two. None of the patients in my pilot study, however, have reported any negative effects. They have even stated that their gums used to bleed when they flossed but after the VCO oil-pulling technique they no longer do so.

Don’t expect miracles – it may not be beneficial for everyone.

Do you oil pull?
I do and had tested the product and technique on myself and my sons first before embarking on the pilot study. Even my dogs like the VCO!

Source: Dominic Ali | U of T News, University of Toronto